Toward a Blueprint for Municipal Sustainability

The City of Missoula has been a signer on the U.S. Conference of Mayors Climate Protection Agreement for three mayor administrations, with Mayor John Engen renewing the pledge shortly after he took office in 2006.

Mayor Engen and the City of Missoula formed a partnership in January 2009 with The University of Montana and Professor Robin Saha of the Environmental Studies Program to complete an emissions inventory of municipal operations. It's an important step in the City's commitment to energy conservation and to operating respectfully as part of the larger world.

A Message From the Mayor

This document represents the City of Missoula's effort to understand its carbon footprint. Like most emissions inventories, this report can't account for every variable or reflect policy choices made in the spirit of serving the community. We leave a sizable footprint, we know, but in exchange, we meet the daily needs of thousands of citizens whose own footprints would grow while their pocketbooks would shrink were it not for municipal government.

This report is designed to inform our decisions as we move the community forward. We made many changes in the way we do business before we embarked on creating this inventory. And, already, the City's investing millions in reducing our footprint as we move forward, in part because of this report, in part because we know it's the right thing to do and in part because conservation of natural resources makes good financial sense. Our hope and our goal is to work to make this report obsolete sooner rather than later.

The City of Missoula Municipal fiscal year 2020 greenhouse gas emissions inventory measures the collective carbon footprint for all city operations. By utilizing the ICLEI ClearPath tool, the carbon emissions were calculated for each sector from raw data that was collected from utility billing and departmental reporting. Updated data accounting for the emissions associated with Northwestern Energy’s specific mix of energy sources gives us a more accurate look at our emissions output and serves as a baseline for all future inventories. 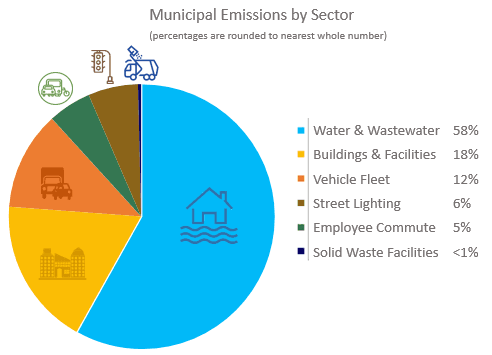